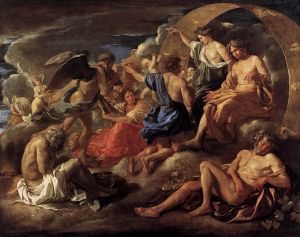 Helios and Phaeton with Saturn and the Four Seasons, by Nicolas Poussin, 1635.

Healing at a deep level remains the dominant theme this week as Jupiter makes his second of three conjunctions with Neptune in 2009. Add to the mix a lunar eclipse, and we’re on information overload and stressed to the breaking point.

Neith has posted a complete report on the Full Moon, so I won’t go into much detail, except to remind everyone that this is the first of a new series of eclipses in Capricorn and Cancer, and it’s one of six eclipses this year, which is rare. Although it’s a penumbral eclipse and fairly well-aspected, some of us are going to get a jolt. Whether you feel it or not depends on where in your chart it falls. I have a friend with mid-degree Cancer Rising and a seventh house packed with Capricorn Sun, Moon, and other planets. You can bet that he’s going face a major life decision in the next couple of weeks.

Even though this isn’t the Big One, we are still sensitive to the gravitational pull of the Earth and Moon lining up with the Sun. And after this Full Moon, we’ll be in a prolonged inter-eclipse period. Normally, eclipses come in pairs, one solar and one lunar, with two weeks in between. This year we get a third one, a lunar eclipse in Aquarius on August 6. That means we’ll have an entire month of the turbulence and disorientation that typically happen between eclipses.

At the same time, we’re deeply submerged in the Jupiter-Neptune conjunction, which peaks on Friday. The first phase of this three-part aspect took place on May 27, the day before Neptune turned retrograde for several months. The second phase is this Friday (July 10), and then the last one won’t be until December 21.

During the first pass, our awareness was focused on a deep-seated wound that may have been embedded in early childhood or perhaps that was carried over from another lifetime. In the second phase, the wound is being re-opened so that the toxic energy can be released. This is arguably the most painful phase. Mars squares Jupiter and Neptune on Monday, July 6, acting as the surgeon’s knife. On Tuesday, Mars sextiles Uranus, and our heads should be a lot clearer. Some of us (operative word some) even may have an idea of where we’re headed next.

The Full Moon eclipse on Tuesday is in wide aspect to Uranus, which may help with the release of emotional blockages. If you feel like you have to cry or rant, find a safe place to let it all out. You may feel like a used dishrag on Wednesday, but you’ll recover much faster if you stay in the flow of the astrological current and don’t try to fight it.

The Sun sextiles Saturn on Thursday. If you need a backup plan, one may show up on your doorstep. Don’t look the allegorical gift horse in the mouth.

On Friday, Jupiter and Neptune meet, with the Moon in Aquarius amplifying the effect. If you’re out with friends, I strongly suggest foregoing happy hour or at least taking it easy on mind-altering substances. You’re going to want to have your wits about you to deal with whatever comes up.

Mars leaves Taurus on Saturday and joins Venus in speedy, chatty Gemini. Get together with friends and go for a bike ride, a hike, or a weekend getaway. Dance, party, and be happy while you can. There’s a lot more heavy lifting ahead.

Image: Helios and Phaeton with Saturn and the Four Seasons, by Nicolas Poussin, c. 1635. I have no idea what’s going on in this painting or who’s who — which is why it seemed like an appropriate image for this week’s astrological imprint. Helios represents the Sun, and we have an eclipse this week, aspecting Saturn. So far, so good. Phaeton, the son of Helios, is best known for insisting that he get to drive dad’s chariot, only to lose control and crash it into the earth, causing the planet to burn up. Obviously, that hasn’t yet happened in this image. But many of us can’t shake the feeling that the other shoe is about to drop …