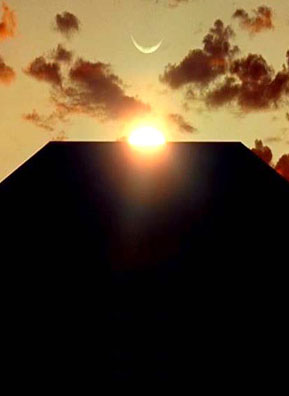 The monolith from Stanley Kubrick's 1968 sci-fi breakthrough, 2001: A Space Odyssey.

I keep telling myself that the universe was born out of chaos.

This has been my mantra for the past two weeks, which have been nothing if not chaotic. The week ahead is going to be even more so, with Uranus turning direct this Saturday less than eight hours before a lunar eclipse in Gemini. If any one planet spells chaos, it’s Uranus, bringer of upsets, surprises, and general mayhem. Gemini, meanwhile, is ruled by Mercury, a lower octave of Uranus.

Mercury also happens to be retrograde for another week – he turns direct on the 13th – and what a performance he has given us so far! Maybe if we nominate him for an Oscar now, he won’t feel obliged to keep up appearances for our sake. I’ve been “entertained” quite enough, thank you very much. Some of the things I’ve done have been shocking – and embarrassing. Can I tell my instructor that I lost a vital piece of equipment because Mercury was retrograde?

Eclipses can be chaotic events in and of themselves. Typically, we experience some kind of rapid change around the time of eclipses, sometimes within a matter of days, but sometimes not for another 30 or 60 days – another one or two lunar cycles. Sometimes, we even experience our “eclipse event” before the actual eclipse. However, this time around, I suspect the change will arrive within a week or two after the Full Moon, and it will correspond in some way to the solar eclipse on November 25. Check your chart (or your StarGuide December forecast) to see where the eclipse occurred. Then look at the opposite house and check what you’ve got going on there. Your “news” could come in an area governed by either house. You’ll be affected most if the eclipses are in an angular house – the first, tenth, seventh and fourth.

For example, if the solar eclipse fell in your tenth house and the lunar eclipse is in your fourth, you might hear about a new job, and it could require you to move or to spend a lot of time away from your family. However, with Mercury still in “reverse,” your actual start date might be delayed until after the first of the year. Indeed, let’s hope it is, because you really wouldn’t want to sign an employment contract or any other kind of contract while Mercury is retrograde. Also, if your eclipse event is an ending of some kind that makes you sad – for example, breaking up with a partner – you may need to let it go for good. Events that happen near eclipses seem to have a sense of purpose and permanence.

In general, synchronicities continue to pop out all over. Every day, I hear a new tale or two about amazing “coincidences” with nearly impossible odds of happening. This is how you “see” invisible planetary energies. They manifest as events, people, and situations. You just need to learn to recognize the patterns. I liken it to the visual puzzles that used to appear in the comics section of the newspaper. Figures were hidden within drawings, and you had to turn the image around every which way to be able to find them. What was so amazing about the illusion was that some people could see it instantly, and others couldn’t see it, even with someone pointing it out to them. That pretty much sums up my take on the invisible energies coursing through our universe. Before we can learn to use them to our advantage, we have to learn to see them.

Speaking of which, here is this week’s outlook:

On Monday, Venus in Capricorn trines Mars in Virgo – two earth signs known for diligence and practicality. It doesn’t sound very romantic, does it? Then, there’s something to be said for doing it over and over again until you get it right. On the same day, the Moon in bold Aries opposes Saturn in Libra. Don’t even ask who gets to be on top (hint: Capricorn is sometimes symbolized by a mountain goat).

Saturday is the big day, with Uranus, the Awakener, waking up in the dynamic sign of Aries and ready to make up for lost time during all those months when he was retrograde. If you’ve needed a shakeup in your life, this could be your moment. Shakeups usually aren’t comfortable, but there’s no faster way to get where you want to be.

The eclipse occurs at 9:36 a.m. on the East Coast of the United States, 6:36 a.m. on the West Coast. We might get to see a bit of it here, if the clouds part long enough.

The weekend and the beginning of next week may be slow, but once Mercury returns direct on December 13, prepare to move forward at warp speed! Until then, keep your nerve … and keep your eye on the prize.