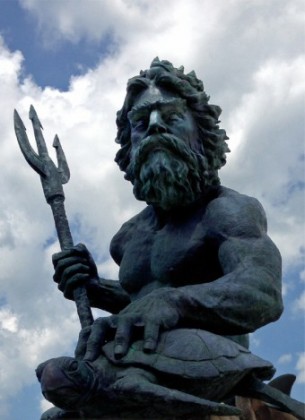 Neptume is to blane. That’s may story and I’m sticking to it.

Seriously, Neptune in Pisces hasn’t been all roses and strawberry fields forever. There’s a debilitating side to it, not the least of which is fatigue, sleepiness, mental confusion, and inability to concentrate. There’s going to be a lot of that going around this week, with Neptune turning retrograde.

There’s also an escapist side to Neptune, which is what many astrologers predicted would happen when Neptune entered Pisces in January 2012. I don’t have statistics about substance abuse, addictions to computer games and pornography, or numbers of mishaps due to failure to look up from a cell phone while driving or crossing the street. However, anecdotal evidence seems to suggest these behaviors are on the rise. Perhaps those of you in the mental health professions could leave a comment or drop me a line if you have some insight.

Of course, substance abuse and escapist behavior is a common response to stress, which has been overwhelming since Uranus and Pluto moved into a close square toward the end of 2010. And it’s not over, even though the last of seven passes occurred in March. But there’s a difference with Neptune. It’s not just about the pressure of breaking down to rebuild, although there’s definitely some of that.

Neptune’s excesses, as I see it, are more in response to the fear of what’s lurking just below the surface of our consciousness. Some of it we know, or at least have some idea that it’s there, perhaps because it has surfaced before. But there are many more monsters swimming around in the sea of the collective subconscious. Some of them may be related to events in other lifetimes of our own, or perhaps events in the lives of our ancestors. The more traumatic an event, the likelier it was to have left an imprint somewhere in the collective. Scientific research is confirming that memories of traumatic events can be encoded in our DNA.

I’ve written a lot over the years about the evolution of human consciousness. What exactly does that mean? How will we be any different? Does it mean that all the conservative Republicans suddenly will come around to your way of thinking? That everyone will rise to a hearty breakfast of vegan sausage and fair-trade organic shade-grown coffee before heading to the park for morning yoga? Although behaviors are certain to change, it’s more than that. I think we’re going to see actual neurobiological differences, changes in the structures of mind and body,  not unlike the metamorphosis of a caterpillar into a butterfly.

With those changes, our perception will expand to see beyond the veil that separates us from other realities. Neptune in astrology and mythology represents the dissolving of that boundary and access to everything beyond it, the vast sea of human memories, stored accumulated knowledge, and the wisdom of the cosmos. Unfortunately, the scars and traumas, whether from other incarnations of our own or from our ancestors’ memories, are likely to be the first thing we’ll see. Our initial glimpses could be so distressing that we escape into mind-numbing activities or shut down entirely, not unlike the common response to post-traumatic stress disorder (PTSD).

When Neptune stations, he stays at the same degree for weeks – in this case, 17 weeks at 9 degrees Pisces (April 17 to August 10). While he’s a standstill, the veil is that much thinner. For some, it will disappear entirely. However, the human mind in its current state can be in only “one place” at a time and has to work overtime to adjust back and forth. It’s exhausting, and there’s not a lot to do about it, which is why the temptation is so great to shut if off in whatever way works. You’ll feel this station more keenly if you have inner planets (Sun through Mars) or sensitive chart points at 7-11 degrees of the mutable signs – Gemini, Virgo, Sagittarius, and Pisces. Neptune stations on Friday at 5:09 a.m. EDT.

This fall, Saturn and Neptune will reach the first of a three-part square. Saturn in Sagittarius represents, among other things, our belief system and the structure it creates in our minds. The square came close in early March, but then Saturn turned retrograde. The two won’t meet again until right after Thanksgiving. In the meantime, Saturn returns to Scorpio this week to finish up old business before moving back to Sagittarius in mid-September.

Saturn and Neptune represent competing energies to start with, let alone in a square. Neptune is a dissolving force, with no boundaries. It is vague, impossible to pin down, and uncontainable. Saturn is a limiting force, with structure and form, and well-defined boundaries and rules that govern that form. Saturn is the taskmaster who says, “Write that book! Go to the gym! No more chocolate!” Saturn is all the “shoulds” going through your mind, not all of which may have originated with you. What “shoulds” do you tell yourself that you know came from your parents, an older sibling, your boss, or a famous diet doctor?

Last week’s Full Moon in Sagittarius, closely square Neptune and conjunct retrograde Mercury, provided a glimpse of what we can expect this fall. It definitely kicked my butt, which is why there was no forecast last week. I’ve got something like five transits involving Saturn and Neptune all happening at the same time, and some are going to continue well into next year. I’ve had to push myself hard to accomplish a fraction of what I used to be able to do in my sleep with my hands tied behind my back. A point came last week when there was just nothing left to push. I sat there staring at the computer screen, unable to write a word. Combined with a few other incidents last week, I felt totally beaten. So I just gave up. Sometimes that’s the best thing to do. Incidentally, a big hug to all of you who wrote about Jinn (he’s doing OK this week) and also to check up on me. I haven’t answered all of your messages yet, but I read and appreciated all of them.

Speaking of Mercury, he returns direct on Thursday (6:33 p.m. EDT) after more than three weeks in retrograde. Projects and business negotiations can get back on track, although you might find that the delays carry over to the following week. With both Mercury and Neptune stationed this week, it might seem like we’re at a total standstill at times. Just hang in there, because the following week will be better. Meanwhile, take care driving. There’s an increased risk of falling asleep at the wheel or being hit by someone who wasn’t alert. As for texting and driving, don’t even think about it.

The other major trend in this jam-packed week is the conjunction of the Sun and Mars in Gemini on Sunday (June 14), and both in a sextile to impulsive Uranus in Mars-ruled Aries – Mars on Tuesday and the Sun on Wednesday. This dynamic combination is favorable for unexpected opportunities to pop up, and the energy level is high, helping to offset the lethargy of the Neptune station. You might already have caught wind of a new possibility opening up following last week’s Mars-Jupiter sextile. If you missed it, you’ll have another chance on Monday, when the Sun sextiles Jupiter.

Some care is needed on Thursday and Friday, when first Mars and then the Sun form a tense square with Chiron. There is healing potential in this configuration, but not without pain. Sometimes the only way to heal a deep wound is go in and scrape it out. Then it can heal over cleanly.

Wishing much love and courage to all,