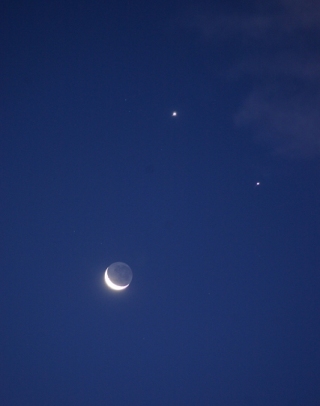 Wow, can you believe it’s December already? I was in Macy’s last week, and the obnoxious Christmas music was blaring. Does that stuff really make people buy more? It just made me want to race out of the store.

As we approach the winter holiday season, there’s growing tension that is going to knock many of us off balance. The change we’ve been wanting may come all at once, at the least convenient and comfortable time. As the old saying goes, watch what you wish for …

This week begins on a quite lovely note, though, with a positive vibe through Wednesday, so take advantage while you can. Venus and Jupiter conjoined early this morning on the West Coast of the United States, and the Moon will conjoin them both later today. We had pea-soup fog here all day yesterday, but it looks like it’s going to stay clear today, so I’m hoping to be able to see the spectacular show this evening. This is such a rare wonder that even astronomers are talking about it. There’s a great article on Space.com, if you’d like to know more.

Astrologically, this is a wonderful occasion for visualizing what you most desire. Go ahead, write a letter to Santa. Seriously, isn’t that the earliest experience with visualization and manifestation that many of us have? A bit simplistic, but it worked a lot of the time, too!

The Moon spends most of Tuesday and Wednesday in upbeat Aquarius, and aside from the little twinges we might get when she conjoins Chiron, the general mood should be friendly and social.

The shift begins subtly on Thursday, when the Moon enters Pisces, and the tension starts to build early Friday when Mercury squares Uranus, which just turned direct last week. If he doesn’t bring swift and sudden news, the Winged Messenger at least will direct your attention to the handwriting on the wall.

We are well past the exact opposition of Saturn and Uranus, which won’t align again until early February. However, as I’ve noted before, we will feel this energy periodically as it is triggered by the lunar cycle and other planetary transits. With the Sun, Mercury, and Mars all in Sagittarius, we are moving toward a T-square in the mutable signs, which generally coincides with rapid change. With Uranus involved and the Moon amplifying its erratic energy, we can expect unpredictable events and upsets. Next week’s Full Moon is a going to be a whopper, but I’m getting ahead of myself.

The Sun and Mars conjoin on Friday at 14 degrees Sagittarius. This is a lot of firepower, and you can use it favorably to achieve certain goals, depending on where this conjunction falls in your chart. Still, even positive changes may require you to totally rearrange your life. Mutable signs are pretty good at this. Those of us with a lot of fixed energy in our charts face more of a challenge.

On Saturday, Mercury squares Saturn, with the Moon aspecting Uranus, Mercury, and Saturn. This is a day for heated arguments, so follow the advice that Neith always gives at the end of her lunation posts and try to be kind, no matter how angry you may be. There are ways of expressing your anger without deliberately inflicting wounds on others. As humanity progresses toward higher consciousness, we are becoming more and more aware that when we hurt others, we hurt ourselves.

Later on Saturday, Mercury forms a favorable sextile to Neptune in Aquarius, so if you’ve had a hurtful argument, this is your opportunity to patch things up right away and perhaps break through to higher ground. Sometimes we need to clear the air in order to get to the bottom of a problem.

On Sunday, Venus enters Aquarius, not a sexy sign for her to be in, but she’s friendly and outgoing — nice energy for the start of holiday party season.

Neith will have her Full Moon post up on Saturday or Sunday, so be sure to check back.

Much courage and love to all…

Image: This incredible photo was taken on December 1 by astronomer Martin Lewicki, who kindly granted permission for us to use it here. Martin is an educator at the Adelaide Planetarium in Austrialia and hosts a website called Astrolab, astronomy for astrologers. (Thanks to Rossa for the lead!)