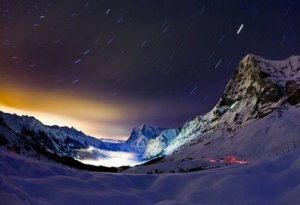 Image: Timed exposure of the north face of the Eiger in the Swiss Alps. Photo by Fabrice Coffrini for Agence France-Presse.

With Mars retrograde in my seventh house and Mercury still not out of post-retrograde shadow, I’m constantly reminded of the “right use” of astrology.

For many people, astrology is a method of predicting what will happen to them. For sure, an astrologer can detect patterns and predict some events or, at least, a range of possibilities. But this is a limited use of a powerful tool that can do so much more.

If you’re a regular visitor here, you know that I’m a big proponent of using astrology to identify the energy currents flowing through our material world at any given time. It’s akin to predicting the weather. When we know that a high-risk period is on the way, we can choose to adjust our behavior accordingly.

For example, although it’s rarely a good idea to blurt out uncensored thoughts and react to situations without thinking first, such behavior can have far-reaching consequences during retrograde periods and some planetary transits. Having a difficult discussion while Mercury is retrograde can permanently damage a relationship.

It takes restraint, and it takes work. The planets can’t do that part for us. They are indicators, that’s all. And yes, when Mars is in my seventh house, opposite my Sun, there is going to be a real temptation to get in a heated argument, but approached with the right frame of mind, this type of discussion can be highly productive.

In a consultation this week, I was looking at the synastry of two people and noticed an aspect indicating a severe barrier to communications that, without attention, could cause the relationship to collapse. I explained that it wasn’t a foregone conclusion that this aspect was a deal-breaker and would lead to arguments, but that both people had a choice of maintaining awareness and working on good communications, or of ignoring the problem until it was too late.

Ultimately, this approach to astrology is empowering. It gives you the power to be proactive, and it helps you prepare for situations in which you may have to react quickly.

Even for me, the astrologer, it’s always good to have this reminder from time to time, and so I pass it on to you in the hopes that it will help you find more happiness and fulfillment.

Much love and many blessings,

4 thoughts on “Saturday Extra! Some Thoughts on Right Use of Astrology”