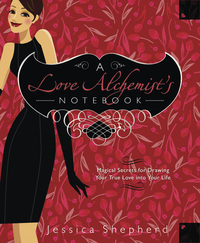 By far the most frequent question astrologers get is about love, mostly from women who want to know when they will meet their soul mate and whether someone they just met is The One.

Some see this as a sad state of affairs. After all, we’re in the new millennium, and women should be seeking to fulfill their highest potential, right? Well, I love it when I get questions about love, because I know that love is hard work, and anyone, male or female, who seeks true love has taken the first step on the path to higher consciousness.

Jessica Shepherd gets it. In her first book, A Love Alchemist’s Notebook, she tells you how to do the work, and a lot more nicely than I generally do. That’s the difference between a self-described “pain-averse” Cancer and a give-it-to-me-straight Aquarius. If you need a little sugar coating to get you through love’s hard lessons, this book is for you.

Many of you already may know Jessica through her blog, Moonkissd. If so, you know that she’s a good astrologer, and that’s what makes this book different from other books on using the law of attraction to find your soul mate. Timing can make a big difference, and astrology is an invaluable tool in that regard. She also gives a comprehensible explanation of the Venus principle and tells you how to put your Venus sign to work for you. It’s a bit oversimplified, but a good start and right on the money.

Speaking of money, Jessica hints at the connection between finding love and attracting abundance in your life in general. It’s no coincidence that astrologers use Venus both as a love planet and as a major financial indicator.

That said, this isn’t really an astrology book. It’s more about manifesting what you want in life, and toward that end contains magic rituals and “love spells,” in the tradition of practical magick, for which the publisher, Llewellyn, is well-known. This is the fun side of doing the work, certainly more enjoyable than sitting in front of a blank journal confronting your Shadow and inner demons!

Overall, this book has a lot of heart, despite the inconsistent voice. Jessica is at her best when dispensing time-honored wisdom, not so good when she lapses into affectation and self-congratulation. But that’s easily forgiven in a first-time author, especially when she has so much to offer. I especially like her discussion of the difference between soul mates and “karmic mates” and her advice for exiting bad relationship karma.

You also have to get past the cover. It gives the impression that this is fluff, when in fact it’s a solid guide to doing the work necessary to get the kind of relationship you want. Then, the marketing people (who usually are responsible for book covers) know what sells, and if women who normally wouldn’t consider magic and astrology read even a few chapters of this book, the world will be a better place. It’s a welcome antidote to all that silliness of The Secret and a good introduction to the real principles of manifestation … starting with the one thing that millions of women most yearn for.