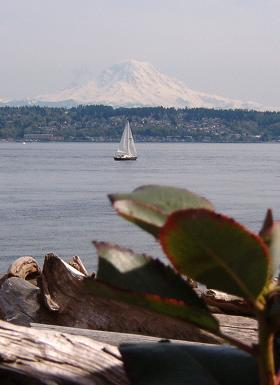 A peaceful day at the foot of Mount Rainier, an active volcano on the Pacific Rim of Fire. © Pat Paquette.

With the coming astrological shift into the cardinal signs, we can expect dramatic developments in the world. But what, exactly, is going to happen? Is there any way to know in advance or at least to make some educated guesses?

In Part I of this article, I explained what a cardinal T-square is and gave some examples of world events in years when cardinal energy was activated. In this post, we’ll explore the cardinal alignment in 2011 and how it differs from this year’s configuration.

This summer, the action takes place primarily in the earliest degrees of the cardinal signs, which are the most volatile, and we’ll be in the midst of an eclipse pair in cardinal signs Capricorn and Cancer. This is the highest-risk period for extreme disruption, be it natural or manmade.

By summer of 2011, Jupiter will have advanced to Taurus, Saturn will be out of range of a square with Pluto, and the eclipses will start shifting into Sagittarius and Gemini. The last eclipse of the Capricorn-Cancer series is a partial solar eclipse at 9 degrees Cancer on July 1, 2011. With Saturn, Uranus, and Pluto in a T-square, the addition of the eclipse forms a grand cross. This configuration is more like a dog chasing its own tail — a lot of activity, but it may tire itself out before any real damage is done.

After that eclipse, Saturn moves past the mid degrees of Libra. While technically still in a cardinal sign, he’s at too wide an angle from Uranus and Pluto to bring heated conflict.

However, Pluto will remain in a tight square with Uranus in Aries, and this is where we’ll see continued upheaval. The square between Uranus and Pluto won’t be exact until 2012, but it will be close enough next year for us to feel its effects.

The last time Pluto and Uranus met was a conjunction at 16-17 degrees Virgo in 1965 and 1966. In September 1965, toward the Full Moon with the Sun, Pluto, and Uranus in a tight conjunction opposite Saturn in Pisces, Hurricane Betsy made landfall twice on the southern coast of the United States and was the first tropical storm to cause more than a billion dollars in damage.

Other developments around that time were the racially motivated Watts riots in Los Angeles, the eruption of the Taal volcano near Manila, a sweeping regime change in Indonesia, and the escalation of demonstrations against the Vietnam War. Meanwhile, India and Pakistan were at war, with China stepping in on the side of Pakistan.

As I wrote in my last article, past events linked to the cardinal T-square and to Uranus-Pluto aspects are so broad that it’s hard to know whether the coming alignment signifies natural catastrophes, war, social upheaval, environmental disasters, or other crises. Further, whenever Uranus is involved in an aspect, the outcome is wildly unpredictable. Still, I think it’s a safe bet that “all of the above” will happen again in the next two years.

One of the biggest threats, in my opinion, is war between India and China as they compete for resources to fuel their rapid growth and development. The entire region is already destabilized, a powder keg just waiting for a cosmic spark to ignite a third world war. The Pacific Rim of Fire also appears to be vulnerable. If history is any indication, hot spots will intensify during these astrologically volatile periods.

I’ll keep you informed in my weekly forecasts and other posts along the way. Meanwhile, if you see news stories that indicate which way the cosmic wind is blowing, please leave a comment with a URL.