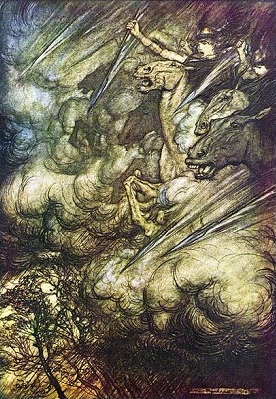 Ride of the Valkyries. Illustration by Arthur Rackham, 1910.

It occurred to me recently that scientists can’t have failed to notice the extraordinary lineup of planets in the sky this summer, and they certainly have read the same headlines I’ve been reading about fires, floods, and other earth events. That begs the question, when will they start putting two and two together?

Apparently, not until hell freezes over.

In my rounds of the news headlines on Thursday, I found this gem, by veteran Associated Press writer Charles J. Hanley:

Floods, fires, melting ice and feverish heat: From smoke-choked Moscow to water-soaked Iowa and the High Arctic, the planet seems to be having a midsummer breakdown. It’s not just a portent of things to come, scientists say, but a sign of troubling climate change already under way.

So much for the cardinal T-square. Turns out it’s all due to global warming. Dang.

Hmmm. Overall, the natural disasters of the summer are a sign of climate change, but we can’t blame it for any particular one. If we can’t link any of them individually to climate change, how can they collectively add up?

They don’t, of course. That’s not to say that climate change isn’t happening and that it isn’t a serious threat to all life on the planet. Nor are climate change and the cardinal T-square mutually exclusive. It’s just that this is an extraordinary summer, as reflected in the astrological pattern, and that’s why we’re seeing these unusual events, along with others that clearly aren’t related to climate change, such as mega-earthquakes in Haiti and Chili and the BP oil gusher. The world economy also is taking a hit.

It wouldn’t matter if God himself descended from Heaven on a beaming ray of sunshine and explained the connection. These guys have themselves so convinced that astrology is “superstitious pseudo-science” that they’d submit to waterboarding before conceding there might be something to it.

Then, they need to justify their own existence so they can keep feeding at the public trough, a benefit astrologers aren’t likely to enjoy in my lifetime. As the AP article explains:

The experts now see an urgent need for better ways to forecast extreme events like Russia’s heat wave and wildfires and the record deluge devastating Pakistan. They’ll discuss such tools in meetings this month and next in Europe and America, under United Nations, U.S. and British government sponsorship.

We know for a fact what they won’t be discussing.

2 thoughts on “Saturday Extra! Global Warming or T-Square, You Be the Judge”