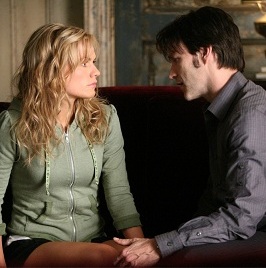 Celebrity weddings, infidelities, and divorces happen all the time, but it sure seems like they’re more extreme lately. Could the cardinal T-square have anything to do with it?

Anna Paquin and Stephen Moyer, co-stars in the acclaimed HBO series True Blood, were married on Saturday. Just as they managed to keep their relationship secret until they announced their engagement last year, they kept their wedding plans out of the public view and opted for a low-key ceremony. It sure was big-time celebrity news after the fact, though.

No matter what they did, it would have been impossible to top the wedding of Chelsea Clinton, who married long-time boyfriend Marc Mezvinsky on July 31 in a gala affair that cost anywhere from $2 million to $5 million. The true cost was a closely guarded secret, but suffice it to say that it was one of the most expensive celebrity weddings in history, inviting the inevitable comparisons to the $2 million that Tiger Woods and Elin Nordegren spent on their Barbados bash in October 2004.

Tiger and Elin on Monday announced their divorce, although reports of their separation began circulating in December 2009. Let’s see … October 2004 to December 2009 is just over five years. Divided into $2 million, that comes out to well over $1,000 per day of marriage. Make a note of that, Chelsea.

In June, I wrote about Harrison Ford and Callista Flockhart, who finally tied the knot after eight years together. The same month, Al and Tipper Gore announced they were separating after 40 years of marriage. Each in their own way was impacted by the T-square.

So what about these latest unions and separations? Is the T-square a function or not?

In the case of Al Gore and Harrison Ford, I had a birth time to work with, so it was easier to see the evidence of the T-square at work in their charts. We have a birth time for Chelsea and Tiger, but not the others. Still, we can look at their natal charts for transits to key planets.

Anna Paquin and Stephen Moyer have a concentration of planets in Virgo and Libra, with a lot of conjunctions to draw them – and keep them – together. Diane wrote a great post on their synastry back when they announced their engagement. Most of their Libra planets are in the mid-degrees, including Anna’s Saturn. So she is coming up on her first Saturn return, which is a time that many people “settle down” in love and in life overall.

Nevertheless, it does appear that the T-square is in effect here, as it is forming a precise aspect to Anna’s Venus at 4 degrees Cancer. I’ve advised all summer that the “out” for any T-square challenges you may be facing is the spot in your chart opposite transiting Pluto. For Anna, that’s Venus, the planet of love! Moreover, the lunar eclipse of June 26,  which connected directly into the T-square, was right on her natal Venus, too. Eclipses often deliver their results at 30, 60, or 90 days. She was married 60 days after the T-square eclipse on her natal Venus.

Chelsea and Marc simply have great synastry, especially in terms of durability. They have a few challenges, too, but what would marriage be without them? The T-square doesn’t seem to be heavily impacting Chelsea’s chart, and without a birth time for Marc, we don’t know which of his houses are being affected. He does have Jupiter at 2 degrees Cancer, which may account for the extravagance of the wedding, but not necessarily the timing.

The T-square definitely is implicated in the fall of Tiger Woods. Although his Ascendant is in Virgo, the T-square is taking place in all four of his cardinal houses, with transiting Saturn now in his first house. For many people, Saturn crossing into the first house is a time when their life falls apart and they start going downhill professionally. Under the T-square, the pressure has been unbearable … and very public.

Tiger and Elin both have Sun in Capricorn – he at 8 degrees and she at 10 degrees. The lunar eclipse on Dec. 31, 2009, fell directly on Elin’s Sun and not far from Tiger’s. A Full Moon lunar eclipse represents endings that are final and irrevocable. According to press reports, Elin moved out for good right before the eclipse, and the divorce was filed on the grounds that the marriage was “irretrievably broken.” Those are fitting words for a lunar eclipse.

In general, it seems that there is an increase this summer of break-ups and unions. It’s as though the whole universe is realigning itself, and we on earth are doing likewise. Stay tuned, because this series most definitely is to be continued.