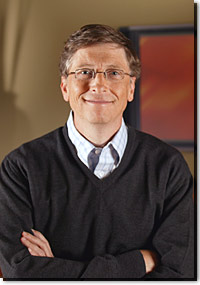 Bill Gates, founder of Microsoft and one of the world’s richest men, turns 55 on Thursday. What better occasion than his birthday to make a few observations about the chart of a quintessential Scorpio?

Gates was born on October 28, 1955, in Seattle. According to Astrodatabank, his birth time was approximately 10 p.m., which gives him an Ascendant of just under 27 degrees Cancer. No one is born right on the hour, so this time is mostly likely a few minutes off. The sign is probably right, though, judging by his preference for V-neck sweaters like your father wore. It just screams Cancer!

As long as I’ve been an astrologer, Gates has been my model of everything Scorpio, which inspired me to start referring to him as “über-Scorpion.” All of the things we think of when we hear the word Scorpio can be applied to Bill Gates: aggressive, competitive, secretive, ruthless, defensive, obsessive, sarcastic, and intimidating, with a penchant for pre-emptive strikes. Scorpio doesn’t wait to be swallowed in a corporate takeover but swallows up the competition first. This is a risk-taker, an individual who doesn’t fear stepping right up to the line of the law and perhaps a bit over it. It’s all part of doing business.

There’s much that could be said about his chart, which has many clearly recognizable patterns – archetypal, you could say. But I’ll leave that analysis to someone else and concentrate on some broader observations.

I have a theory that Bill Gates had to be born a Scorpio in order to play his assigned role in this incarnation as transformer of personal computing. This is someone who aligned with his life’s purpose from a very early age. No matter what you might think of him or the PC, you can’t argue that he hasn’t had a powerful influence on how we use computers and, more importantly, how we communicate over the Internet. And this is where it gets interesting.

A few days ago, Gates’s successor at Microsoft, Ray Ozzie – himself about to retire – set the computer industry abuzz with a proclamation that the PC is dead. In its place we will have “software as a service” (SAAS) and something called “cloud computing.” It is a completely different model of computing, the equivalent of an empire crumbling in the wake of a new world order.

Gates left Microsoft on Jan. 7, 2008, ostensibly to spend more time at the Bill and Melinda Gates Foundation, the charitable trust he set up with his wife. When he left Microsoft, Pluto was in the early degrees of his sixth house, which is associated with one’s daily routine and service to humanity, and had just made a favorable trine to his second-house conjunction of Jupiter and Pluto (wealth and power). Saturn, meanwhile, had entered his third house, changing the way he communicated with others. With Saturn going down in his chart, his career was bottoming out. Apparently, he intuitively knew when to retire.

Over the summer, while the cardinal T-square was in full force, transiting Jupiter and Uranus were on Gates’s Midheaven, with Neptune and Chiron opposite his natal Jupiter-Pluto conjunction. That means Saturn crossed his IC (fourth-house cusp), and now Bill Gates is rising again, on a steady climb toward a second career peak.

Both Gates the man and the technology for which he is best known are transforming and evolving, and this seems somehow very exciting. Gates is moving toward using more of his wealth to help solve the world’s urgent problems, while the collective consciousness is channeling into new ways to expand the creative power of our minds and to connect with each other. We’re only one step away from getting rid of the material devices altogether and communicating telepathically.

It all seems so very Scorpio…