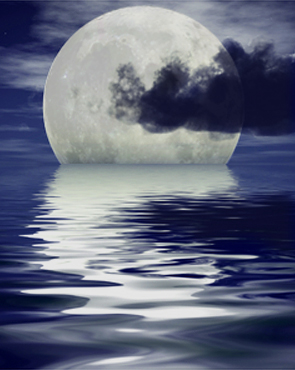 At this time of year, the veil between the worlds is at its thinnest. It’s not hard to imagine how this phenomenon gave rise to All Hollow’s Eve, the Day of the Dead, All-Saints Day, and other traditions involving ghosts and goblins.

These days, though, when we talk about the thinning of the veil, it’s not just about Halloween but often is in the context of what some people refer to as past lives. I call them “other lives,” in acknowledgement that “past” depends on the illusion of linear time. As more people have these memories, we begin to understand how everything is connected and how relationships can survive across many lifetimes. However, it’s one thing to say we’re all connected, but quite another to feel it deeply in our bones.

If you’re having these memories or thinking along these lines, this week’s Full Moon in Taurus may bring up new and important information. The popular notion of “karma” is that we did something terrible in a past life and have to pay for it this one. Given the violent history of humankind, it’s possible and even likely that many of us did do something horrendous, and as we begin accessing these other lifetimes, we may recall situations that are hard to face.

However, it’s also possible that what bubbles up into our consciousness, while distressing, isn’t our fault. I recently had a client who was freaking out because he thought he murdered his girlfriend in a previous lifetime. With some digging, I uncovered an alternative explanation in which both of them contributed to her demise by having an illicit romance in an era when adulterous wives of nobility were put to death. Did he kill her? We can imagine that, at the time, a man in those circumstances would have thought so and felt crushing guilt in addition to the grief of losing his beloved.

These kinds of memories are so powerful that they can survive physical death. Another theory is that trauma registers in our DNA, and the memories are from ancestors. We don’t know exactly how this recall works, but it’s my theory that when we have a traumatic experience, it registers in our energy field and ripples across dimensions of time and space to other incarnations – and not necessarily in a one-way direction. The psychic underworld, where these events are registered, falls within the realm of Pluto and Scorpio. There are many ways of looking at Saturn and Pluto in mutual reception, not the least of which is collective financial reckoning. However, it’s also a perfect setup for karmic reckoning, and there’s no more fitting time for full disclosure than the Full Moon.

The chart for this Full Moon isn’t an easy one, with Saturn closely conjunct the Sun in Scorpio and opposite the Moon in Taurus. Painful endings and being forced to let go will be themes for many. The good news is that both Sun and Moon are in favorable aspect with Pluto, Scorpio’s ruler and planet of transformation and rebirth. The old cliché “an ending is but a new beginning” definitely applies. With Pluto in favorable aspect, there’s also a good possibility that accessing other dimensions will help access and release negative karma. The close trine from the Sun and Saturn to Neptune and Ceres provides additional support for recognizing the cyclical nature of life and for approaching difficult memories with compassion and acceptance.

There are several oppositions and squares in the Full Moon chart, including the Uranus-Pluto square, the defining aspect of our time. Ceres opposes Pluto and forms a cardinal T-square (you can’t see it in the chart, because I’m not able to isolate aspects to Ceres in Kepler software). Once again, we may revisit issues that dominated our lives in the summer of 2010. From Wednesday to Friday, Venus in early Libra forms a fourth leg, turning the T-square into a grand cross. At the peak of the cardinal T-square in August 2010, Mars and Saturn were conjunct in early Libra. Venus rules Libra and is a much gentler energy, so it’s possible that we can make further progress in the new directions that many of us began taking back then, especially within our closest relationships. With Uranus in the mix, there’s still an element of volatility and unpredictability, but that also means the door is wide open to revolutionary change.

The fourth opposition in the Full Moon chart involves Mars in Sagittarius and Jupiter retrograde in Gemini. This is not an inherently “bad” opposition and can represent a burning quest for knowledge. The downside is that it’s a classic setup for war and aggression, with a tendency to overreach.

We also have a square between Neptune and Mercury, who enters Sagittarius earlier on Monday. Blurting out the truth and confused thinking – not a good combination, especially if you happen to be running for political office. Then, who knows? Maybe one of the candidates in their sleep-deprived end-of-campaign state will accidentally tell the truth. This is the first of three squares between Mercury and Neptune between now and the middle of December, due to the Messenger’s retrograde phase. Mercury is moving in slow motion this week as he approaches retrograde on November 6. We’re well into the pre-retrograde shadow period, so be sure to wrap up projects, sign important contracts, and back up computer data early this week. Don’t wait!

So, here we are, heading into the darkest days of winter, with a stressful Full Moon and, on top of that, a potentially catastrophic storm heading for the East Coast of the United States. Meteorologists have commented that the gravitational force of the Full Moon threatens to make the storm worse. With the addition of a difficult astrological chart, it does look like a perfect storm. To all of my dear friends and clients in harm’s way, please take measures to stay safe.