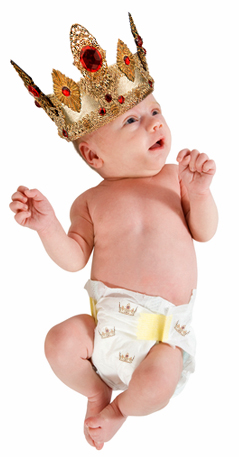 And Cancer it is! And a boy. William and Kate – formally known as the Duke and Duchess of Cambridge – welcomed their new arrival today at 4:24 p.m. London time, according to a press release from Kensington Palace.

Birth charts of babies often mirror those of their parents. William was born at the New Moon in Cancer, and Kate at the Full Moon in Cancer, so my gut feeling was that the baby would be born on the New or Full Moon in July (or maybe late June). William’s mother, Diana, also was a Cancer, and she had Mercury retrograde in Cancer. Baby Cambridge held out until after Mercury returned direct on July 20. However, that means Mercury backed up far enough to form a tense cardinal T-square with Uranus and Pluto. I’ll talk more about that in a minute. But first, let’s look at the “Big Three” – the Sun, Moon, and Rising signs.

The new prince has the Sun at 29 degrees Cancer, Moon at 28 degrees Capricorn, and 27 degrees Scorpio Rising. It’s not uncommon for children to have the Moon in their mother’s Sun sign, and that is the case here. His Moon also is widely conjunct Kate’s lunar South Node, often used in a chart to indicate past lives. He’s got ties with his great-grandmother, too. Queen Elizabeth has 21 degrees Capricorn Rising. Baby Cambridge also has Mercury conjunct Daddy’s lunar North Node, another sign that there’s strong karma in play. His Ascendant also is near the degree of Grandpa’s Sun (that would be Prince Charles). It kind of gives you the sense that this family has been around the incarnational block together a time or two.

Moon in Capricorn can be tough for a child, as it can be shy and reserved, with feelings of isolation, no matter how much love and attention the child may receive. But Moon in Capricorn can also be very wise, with a strong sense of duty and responsibility. Rising Scorpio also can be quiet and introverted, all the more likely with chart co-rulers Mars and Pluto in introverted signs. More importantly, Scorpio is the sign of rebirth and transformation, and this chart strongly suggests a leader who will transform and revolutionize. This could refer to societal institutions and likely the monarchy itself. The baby’s lunar North Node also is in Scorpio. Not only will he play a role in changing society, but it’s his purpose in this lifetime.

All of that would be exceptional enough, but this baby’s chart is extraordinary in other ways, as I predicted in my video earlier this year. Not only is he born under a rare and special grand water trine, but there’s also a tense cardinal T-square. A near exact conjunction of Mars and Jupiter forms a bridge between these two very different configurations.

As I mentioned in my weekly forecast, Mars and Jupiter are conjunct not only by latitude but also in declination. In other words, they will be extremely close to each other in the sky, which isn’t always true of conjunctions. This makes the aspect all the more powerful and strongly suggests Baby Cambridge will grow up to be a powerful leader, whether as king or in some other leadership capacity. Historically, this combination in the birth chart of a prince was considered a good sign that he would be a strong king, bringing the country wealth and military might. Queen Elizabeth has a close conjunction of Mars and Jupiter in Aquarius.

Mars and Jupiter also form a cardinal T-square with Uranus and Pluto, although it’s still a bit wide. Mercury, which came out of retrograde in Cancer on July 20, is at a closer angle. Uranus and Pluto are in an epic alignment that will continue through 2015 and is reflected in our turbulent times. All children born this summer will carry the spirit of these times into the future. Born in a tumultuous era of global change, they will have an uncanny ability to transform conflict and impossible problems into dynamic, constructive solutions, in their own lives and for society, too. They will be intuitive and compassionate, but they will not be afraid to shake up the system, whatever form it may be 20 to 30 years from now.

I initially favored July 8 based on an announcement by the palace that the baby was due around the 13th. Turns out that was early. In my video, I did mention the Full Moon on July 22 as a possibility, although it would have made Baby Cambridge a Leo … well, except that the Sun enters Leo just two hours before the Full Moon (4:56 p.m. London time), so technically it was possible to have a Full Moon baby and a Cancer, too! And so it is.

A few days ago, as I was contemplated the possibility of a 29 degree Cancer birth chart, I looked up the Sabian symbol** and got quite a jolt. A Daughter of the American Revolution, with the keyword INHERITANCE. Now, if you read the whole text, it has to do with fiercely maintaining the status quo, no matter what, and Cancer is one of the more traditional signs. But taken in context – an American contemplating conservative American values – it’s hard not to read revolution into this symbol, especially when the chart itself has the unmistakable marks of sweeping change.

[UPDATE 4:47 p.m. PDT] Sabian symbol** for Ascendant 27°08′ Scorpio: The king of the fairies approaching his domain. “This is a symbol of the eternal promise underlying all inner self-realization, since any actual fullness in life is altogether independent of the passing state of affairs in a world of time and space. Implicit in the symbolism is the futility of man’s common reliance on people and things through some mere accident of contact. Outer reality takes the form with which he endows it if he exercises his sovereignty over its various potentials in the creative realms of his own imagination. The keyword is ALLEGIANCE.”

Until recently, British law decreed that the heir to the throne should be the first-born son. The law was changed effective October 2011 so that the oldest child, whether a boy or a girl, would inherit the monarchy. It’s a moot point for now, since the firstborn is a boy. Then, it’s not like this kid is going to get anywhere near the throne anytime soon. After all, Charles is still waiting for Mummy to give it up, and William is only 31. And, for all we know, the monarchy may be on its way out, anyway. Just because England has had a king or queen for more than 1,000 years, doesn’t mean it always will, and judging from this kid’s chart, he will play a pivotal role in the revolutionary years to come.

** From The Sabian Symbols in Astrology, by Dr. Marc Edmund Jones. The author, an astrologer, channeled this work in 1925 with the help of Elsie Wheeler, a gifted psychic. There’s one symbol one for each degree of the zodiac, and we can use them to gain insight into charts.

2 thoughts on “A Rebel Prince?”