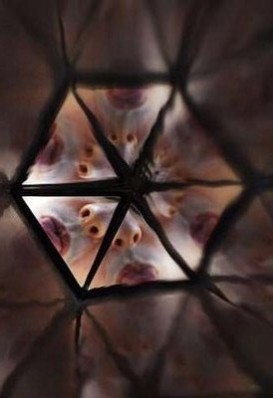 Transition,” by Satu Bushell. Photo by Daniel Munoz of REUTERS.

As Mercury continues in retrograde motion through Pisces, more opportunities emerge for us to question what we believe.

In a brilliant essay on Counterpunch, Walter Davis discusses what it means to be a radical thinker. The ostensible subject is the decision by a theater in New York to postpone the production of a play about Rachel Corrie, the 23-year-old peace activist who was crushed to death three years ago by an Israeli bulldozer. However, the essay reaches beyond the immediate conflict to explore how we structure our thought matrix so that subsequent stories will stick, whether they’re true or not, and how we can trick ourselves into believing we’re open-minded when we’re really not. I admit that I had to make a mental effort to read this essay, but it was well worth it.

The mind needs structure, or it falls apart. Our minds cannot be so “open” that they accept anything whatsoever, with no order or reason. Given the overload of information available to us today, we’d be overwhelmed to the point of dysfunction if we didn’t have effective mental filters. The challenge, then, is to have a solidly structured mind, while maintaining flexibility. If our belief system is so rigid that it can’t readily accommodate new ideas, it will break rather than bend under pressure.

One of the scariest cards in the Tarot is The Tower. Indeed, many people drew the connection between 9/11 and The Tower, complete with the grisly image of people falling to their deaths from the upper stories. The presence of The Tower in a personal reading often predicts imminent upheaval.

The esoteric meaning of this card, however, is the forced changing of beliefs. In traditional decks, the top of the Tower is a crown, and this is where the lightning strikes. The image we get is of the head being blasted open. The people falling from the Tower are beliefs, destroyed on a moment’s notice by a bolt out of the blue, a “bomb” of new information. When something happens that shatters our world, often it’s because it shatters our illusions. In the case of 9/11, Americans mistakenly believed that our geographical isolation from the rest of the world and our military might protected us from attack.

It’s human nature to fight change, and that’s why it often takes a crisis in our personal lives to get us to wise up. This has to be true collectively, as well.

Lightning, by the way, falls under the rulership of Uranus, the planet that often indicates upset and sudden change in our lives. Uranus currently is moving through Pisces, which is about beliefs, the past, dreams, illusions, and, carried to the extreme, blind faith divorced of all reason.

But why does it make any difference what we believe? Reality is reality, right? Well, not really. Through the power of our thoughts and beliefs, we impact our reality, both individually and collectively. The invisible energies coursing through the Universe manifest into reality depending on how they are directed. This is why most astrologers will tell you that there’s no “fate” in astrology, that we have a free will. We exercise that free will by what thoughts and beliefs we choose to hold. And if we aren’t aware of our belief structure, then we are victims of our own ignorance.

That’s why, as simplistic as it sounds, one of the most vital things you can do to change the world is to change what you believe.

[This article originally appeared on The Pisces Chronicles on March 6, 2006.]