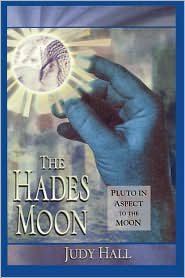 When I was looking for something to post from my archives, I came across this one on Pluto and found it contained another example of a chart with the generational Yod we wrote about in yesterday’s Ask Our Readers post! By the way, I highly recommend “The Hades Moon” by Judy Hall for anyone with a natal Moon-Pluto aspect.

With Pluto on the brain, it seems like I keep running across examples of how he operates both by transit and natally these days. I’m also reading “The Hades Moon” by Judith Hall. It’s scary how much I recognize from my own life from that book!

What I’ve read so far in “The Hades Moon” is helping me see how much subtle manipulation was going in my life coming from both my dad’s mom and my mother. They both were prone to praising the absent relative in front of the present one, creating rivalries among the other family members. According to Judith Hall, this is typical behavior of those with Pluto in aspect to the Moon. I’m fairly sure my mother had a Moon in Pisces trine to Pluto in Cancer.

Here is an example of Pluto at work: natal Moon conjunct Pluto and Jupiter in Virgo, both squared by transiting Pluto in Sagittarius. This is from the chart of a relative of mine and is one point on the base of a Yod (sextile Neptune in Scorpio, with Saturn in Aries as the apex). She has a serious case of tunnel vision. Whatever course she has determined for herself is all she will allow herself to see. An analogy that occurred to me is this:  she lives in a bubble with a reflective inner surface even though it’s clear from the outside looking in. All her hopes and fears are reflected back to her amplified by Jupiter. Transiting Pluto square to her Virgo stellium has intensified her fears and caused her to withdraw even more into her nuclear family unit (husband & two children). What’s going to happen when Saturn in Virgo starts moving over that point makes me quail as I’m sure it’s going to be painful. Could it be with Saturn as the focus of her natal Yod, a Saturn transit could help her start to gain some understanding of what has happened?

One of my personal challenges has been to accept that no matter how much I wish-will otherwise, people I love must find their own path, and if that path doesn’t include growth by my definition, so be it.

Here is another example of a natal Pluto aspect, in this case Pluto exactly conjunct Ascendant. This individual lost a close friend to suicide in high school, and a year or so later was the first person on the scene of a fatal motorcycle accident of another friend. The rider almost completely decapitated himself on a guy-wire and died within minutes. She told me she moved the head closer to a natural position to prevent others at the scene from seeing how devastating it was. I was seriously impressed by her courage under fire as she was 19 years old at the time. This young woman just finished a Masters degree in hospital administration and was hired by the State to evaluate how well state-funded health care is working. All I can say is watch out!!!

Astrology has been an excellent tool for myself and many others to sort out family dynamics and start healing old wounds.