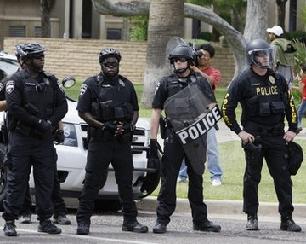 Riot police at the Arizona Capitol in Phoenix. Photo by Ross D. Franklin for The Associated Press.

Arizona’s new illegal-immigration law and the protests it unleashed stand out as an early indicator of how events will unfold during the cardinal T-square of 2010 and 2011.

Gov. Jan Brewer signed the law on April 23, just as Saturn and Uranus were approaching exact opposition in Virgo and Pisces, the fourth contact since November 2008. It is scheduled to go into effect in late July or early August, right around the fifth and last opposition of Saturn and Uranus on July 26.

By that time, both planets will be in early cardinal signs, in a tight square with Pluto. We can expect more protests, possibly more violent, and the federal government likely will intervene as well.

Of course, Mercury also was retrograde at the signing, and that makes it more likely that there will be changes, if the law isn’t repealed altogether. But even if it is, powerful forces have been set in motion that will continue to play out until 2012 and beyond.

The new law makes it a punishable crime to be in the United States illegally and gives police in Arizona the power to stop and question people they suspect of being illegal immigrants. The backlash was swift and severe. According to news reports, protestors stormed the state capitol and drew comparisons with Nazi Germany.

Gov. Brewer, a Republican in a historically conservative state, said the law was needed because the federal government wasn’t doing enough to fight illegal immigration and lawlessness along the border with Mexico. Other states are considering similar measures.

The Obama administration reportedly is considering a legal challenge. Many civil rights groups also are threatening to sue, saying that the law will lead to racial profiling and harassment of Hispanics and anyone who looks like one. From there, it’s only one step to legal authority to stop anyone, for any reason or no reason at all. If it seems like we’re on a slippery slope toward a police state (many people argue that we’re already there), it’s not just paranoia.

Once Saturn and Uranus move into action-oriented cardinal signs this summer and form a close square with Pluto, the playing field will expand. It’s likely that the federal government will intervene at that time. In a T-square, the planet at the apex takes the “heat.” Pluto will be squared not just by Saturn and Uranus, but simultaneously by Jupiter, Mars, and Venus. Immigration and legal issues fall under the provenance of Jupiter, which was approaching conjunction with Uranus when the law was signed.

But what does Pluto in Capricorn represent? The “conventional” interpretation is that it’s about Big Government and Big Business. If so, the situation in Arizona — as well as other protests breaking out around the world — may be an early test of this power.

That said, we must take care in connecting the various astrological players in this unfolding celestial drama to earthly counterparts. For example, it’s tempting to assign Uranus to the Democrats and Saturn to the Republicans, but that would be an error in our thinking. The planets in signs represent forces of nature, which express themselves through humans and through the Earth herself.

Here’s something else to think about: As long as Pluto is checked by Saturn in Libra and Uranus in Aries, we may be under surveillance but not under totalitarian control. That could well change in 2012, when Saturn enters Scorpio and begins to “cooperate” with Pluto, through both a friendly sextile and mutual reception.

At that point, the people may be on their own to battle the combined forces of business and government, and our definitions of “conservative” and “liberal” may become totally meaningless.

1 thought on “Saturday Extra: The Cardinal T-Square and Immigration Law”