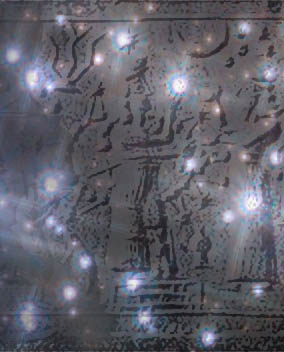 We’re down the rabbit hole for sure. Actually, it’s how I imagine a caterpillar would feel in the chrysalis. No longer a caterpillar, but not yet a butterfly.

Normally, the two-week period between eclipses is a weird, volatile space. This one, however, is infinitely weirder, as the Sun, Moon, Earth, and Venus move into closer alignment next week. I’ve been so sleepy I can barely keep my head up. I bumped into an astrologer friend yesterday at the Vashon farmer’s market who recounted the story of a friend of hers who took a bath one evening, fell asleep in the tub, and didn’t wake up until morning!

There’s so much going on “up there” that it’s hard to know what phenomenon is causing all of this strangeness. All we can say is that it is indeed strange.

Some of you know that my project this quarter is the preliminary work for a full-length documentary about professional astrologers. I’ve started the on-camera interviews, which look great, thanks to the excellent camera, sound, and lighting work of my crew. During our shoot this past Friday, it was abundantly clear how much we’ve learned in eight months.

I’ve been working insanely long hours in the editing room, and I’m even editing in my sleep. If, in my dream, I don’t like how a particular sequence looks, I “edit” it. More than once, I’ve awakened in the middle of one of these nocturnal “adjustments” laughing at the irony. Seriously, though, wouldn’t it be something if it turns out we indeed can “edit” our lives by revising our memories and visions of other incarnations? I know, I know. It’s pretty far out there. So throw me in jail for heresy.

Looking at planetary transits, it appears that this week is going to be a lot like last week. Mercury in Gemini suggests that life is speeding along, but Venus retrograde in Mercury’s sign exerts a drag. On Thursday, the day Mercury entered his home sign, my car wouldn’t start. I got straight through to AAA, only to find out that the tow truck was broken down. Fortunately, all I needed was a jump start. Still, it took up a chunk of my day, when I’m running as fast as I can, only to get farther and farther past my deadlines.

Monday’s Sun-Uranus sextile promises a spark of creativity and a happy surprise or two. But inconjuncts from the Sun and Mercury to Pluto early in the week suggest underlying tension. Something just isn’t working, like trying to fit the metaphorical square peg in a round hole. With aspects to Chiron also in the picture, old wounds could be triggered, possibly from other lifetimes. Many of us are experiencing cross-dimensional awareness. It’s part of the leap in consciousness that’s taking place on the planet. The initial contact can be unsettling, especially if traumatic memories are awakened.

Mercury squares Mars on Wednesday, which gets my vote as the most difficult day of the week. Try not to go overboard in criticism, even if you’re asked for it. There will be a tendency to point out every little thing that’s wrong. Sensitive egos could get bruised.

Mercury moves on to conjoin Venus on Friday and trine Saturn on Sunday. There’s an interesting three-way conversation here. Saturn is retrograde in Libra, which is ruled by Venus, while Venus is retrograde in Gemini, ruled by Mercury. There should be plenty of opportunities during these three days to discuss recurring issues in close relationships, particularly those that never got resolved. Again, I think it’s possible that we may even be able to address karmic issues from other lifetimes, with a fighting chance that we can come to some resolution and move on. So many people seem to have a lot to release right now. A collective heave-ho of old baggage sure would help lighten up the planet.

Perhaps we could schedule a pickup with Universal Parcel Service to come get it.