Reader Osk Ingad Alden sent this photo, with the following explanation: My Pisces had his fifth birthday so we went downtown to the aquarium in Denver. It almost looks like the fish is swimming in the starry universe. Good fish!

Forget “the new paradigm.” Everything is in such flux that we’re getting a new paradigm several times a month.

Meanwhile, closer to home, the Republican governor of Wisconsin moved to bust the unions representing state employees, prompting a showdown in the legislature and a march on the Capitol by thousands of protestors. It worked in Egypt. But it won’t persuade Gov. Scott Walker, who says he’s going to go ahead with his plan anyway, with the backing of the newly elected Republican majority. Can you spell Khadafy Qadhdhafi Gaddafi?

Things may quiet down a little this week, when Mercury and Mars join the Sun in tender Pisces. But it won’t be for long. Next month, rebellion planet Uranus enters Aries, sign of the warrior, with several planets following shortly afterward. By the New Moon in Aries on April 3, eight out of ten planets will be in cardinal signs, with six in Aries. Hopefully I’ll be caught up with my backlog of consultations by then so I can write a proper New Moon post.

This week, Mercury enters the sign of the Fishes on Monday followed by Mars on Tuesday. That is “Fishes,” by the way – plural. Pisces is two fish, each swimming in a different direction but tied together with a knotted cord. If you want to know what this symbolism means, watch a Pisces in front of a supermarket shelf trying to choose among 27 different kinds of peanut butter.

Seriously, now … It’s said that there are two kinds of Pisces, the “good fish” and the “bad fish.” One of them believes in the power of the Universe and can swim with the flow. The other puts blind faith in religious dogma and superstition and beats its scaly little head against the wall. This good-fish, bad-fish analogy is reflected in Neptune, the modern ruler of Pisces, which on one hand is highly intuitive and can merge into higher realms of consciousness, and on the other is permanently out to lunch (McFish anyone?)

So let’s hope the Sun, Mercury and Mars inspire us to be the good fish and not the bad one … although you will find plenty of examples of bad fish in the headlines this week. Unfortunately, giving a sword (Mars) to a bad fish isn’t a good idea. They tend to do things like killing in the name of the Lord.

The big day this week is Friday, when Jupiter in Aries squares Pluto in Capricorn. Although the planetary signature under all the unrest in the world is complex, Jupiter squaring Pluto is a major factor, especially with Jupiter in Mars-ruled Aries. This aspect repeats a pattern from the peak of the cardinal T-square last summer, and it’s mostly about who has the money versus who has the power.

Then something shifts this week, when Mars enters Pisces. With Mars no longer in Aquarius, the sign of revolution, political unrest gives way to fighting on behalf of religious ideals. Moreover, Mars and Jupiter will be in mutual reception (Jupiter was the sole ruler of Pisces before Neptune was discovered in 1846). I’m somewhat concerned the focus will shift from demands for freedom and individual rights to religious extremism – if not religious, then political.

However, there’s another set of aspects on Friday that could help turn conflict into a constructive dialog for growth and positive change. These occur right before and after the Jupiter-Pluto square, starting with a conjunction of the Sun and Mercury, followed by a sextile from both to Pluto.

This is where it gets really interesting, because all of that pent-up energy from the Jupiter-Pluto square has a path of release. Sextiles are open channels that allow energy to flow freely. Confrontation can be constructive or destructive. This planetary alignment favors a positive outcome – at least, for those who want it. Some factions profit by stirring up conflict and so aren’t inclined to seek resolution. These fishes aren’t just bad, they’re rotten.

On Sunday, the Moon in Capricorn goes through a quick review of the week’s aspects, starting with a conjunction with Pluto, then moving on to a square with Jupiter, a sextile to the Sun and Mercury, and a square to Saturn just so the taskmaster doesn’t feel left out of the T-square party. He’ll get his turn in a few weeks, though, and if you pay attention on Sunday, you may get a big hint about how it’s all going to go down. 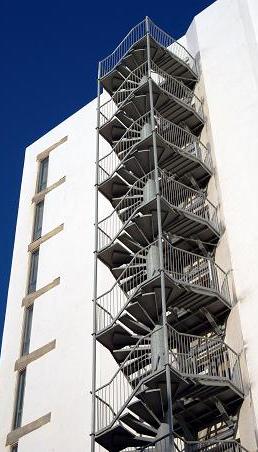 Sometimes the way out is up. © Judy Ben Joud/Dreamstime

This is it, kids. It’s peak week for the cardinal T-square — the astrological “week from hell” we’ve been anticipating — with a one-day grand cross thrown in for an additional increase in blood pressure.

I’ve written a lot over the past few months about possible manifestations of the T-square, based on events associated with similar configurations in history, notably in 1989 and, even more prominently, in the early 1930s. The events in 1989 for the most part were well-defined, one-time occurrences, even though some had far-reaching consequences that are still in play.

Conversely, in the early 30s, developments unfolded over several years. In many ways, it was the worst of the two. It almost makes me wish the economy would collapse with an eardrum-shattering sonic boom so we could get it over with, rather than being dragged deeper and deeper into economic depression and worldwide totalitarianism.

If you had a choice, which would you choose? What about in your personal life? Would you rather bite the bullet, suffer acute pain, be done with it, and move on into new territory? Or would you rather suffer low-level background pain continuously over several years, perhaps with an option to numb it until things turned around?

Not that I think we have much choice right now. Under the cardinal T-square, our options are limited. We’re pretty much being forced down a certain path, the only one that’s not blocked. Still, I’m a big believer that there’s always another way out that we just don’t see. When you’ve got four walls closing in on you, sometimes you forget to look up for the escape hatch.

Hopefully you took my advice last week and began confronting the major issues that are standing in the way of your growth and progress. Sometimes all it takes is a new awareness, especially regarding the source of the blockage. Until we identify the source of a problem, we can only treat symptoms and not the root cause.

Getting to the source is this week’s theme, thanks to a high-tension square between Mars and Pluto. Be forewarned that you may have to sit with some discomfort, but if you can stick with it, your chances of getting out of a rut and moving forward are much better.

We’re already hot in the middle of the action as the week begins, with Mars still in close conjunction with Saturn in Libra. On Tuesday and Wednesday, we’ll have a tight T-square with Mars opposed to Jupiter and both square Pluto. If I had to pick the most difficult day during the 2010 T-square, this would be it … although this past weekend was a close second.

The truth can be uncomfortable, which is why many people choose to wear rose-colored glasses or keep their heads buried in the sand. Put another way, waking up can be a painful experience. In my observation, most people wake up to pain first, and then they experience joy and happiness. It’s seldom the other way around.

On Friday, the Moon enters Cancer and closes the open end of the T-square, so that it becomes a grand cross. Emotions could be so intense that some of us might think we’re losing our minds. Some may experience a continuous feedback loop of thoughts going ’round and ’round in their heads. If this happens to you, try to wait out the storm. It will last for several hours, and then it will be gone. Speaking of storms, this also is a prime period for high winds and tropical cyclones.

Later on Friday (Saturday in the Eastern Hemisphere), Venus enters Libra and adds her voice to the cardinal T-square. Venus rules Libra, so she is a very strong voice for beauty, peace, and harmony. We’re in need of these gifts now more than ever, not just in our personal partnerships, but also in the collective and in international relations.

Alas, we may have to fight for them, as the first aspect Venus makes is a testy opposition with “got to be me” Uranus in Aries. You can stand up all you want for your freedom, but you may want to ask yourself, “freedom from what?” The Marlboro man is free as a bird … and alone.

That message will become abundantly clear on Sunday, when Venus conjoins Saturn. For a committed partnership to work, there has to be bona fide give and take. That said, there are imbalances in most relationships I’m observing these days, with one person carrying more than their share of the load. This may be necessary, as we can only carry according to our ability.

Unfortunately, a lot of people are glad to let others carry their load for them, and they always seem to find those who believe it’s their duty. Hopefully Venus and Saturn in Libra will put a stop to that. The willing pack animals among you may need to drop your load in order for your lazy loved ones to step up to the plate. Trust me, you’ll be doing them a favor.

I leave you with this quote by R. Buckminster Fuller, author, inventor of the geodesic dome:

Don’t fight forces, use them.

That’s our mission this week, if we choose to accept it.

Wishing you all the love and courage under the Sun,