Of all the posts I’ve written for my blog, The Pisces Chronicles, this one continues to get several hits a week. And with a powerful solar eclipse coming up this week in my seventh house of relationships, it’s a topic that is foremost in my mind. 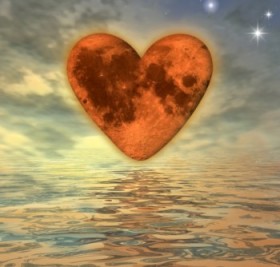 When we’re talking among ourselves, astrologers often lament that the question we get most often is, “When will I find love?” or the even lower version, “Will he come back to me?”

Well, I just love it when people ask about love, no matter what version of the question they ask!

There’s no greater treasure in life than true love. It’s what we’re here for, and it’s what we all want, in our deepest heart of hearts. When you get right down to it, what else is there? That so many people are asking about it – even in what we consider to be an “unenlightened” way – is very encouraging.

It means they have started down the path.

I’m going to digress for a minute and talk about the Hollywood movie plot. In the mid-1990s, Chris Vogler circulated a paper at his studio about how the journey of the mythical hero could be incorporated into scripts to make the story more compelling. He drew heavily on the work of Joseph Campbell, notably The Hero with a Thousand Faces. His formula was so successful that he ended up writing a book, The Writer’s Journey, which is now on the must-read list of every Hollywood screenwriter.

The reason I mention it is that, while it might not be immediately obvious, the hero’s journey is extremely relevant to romance films, be they serious love stories or romantic comedies. After all, what is the classic formula “boy meets girl, boy loses girl, boy gets girl back” if not a hero’s journey? The story starts with desire – the strongest desire human beings ever feel – and that puts the hero or heroine on a path of testing, trials, and self-discovery as they get closer to what they really want. Pay attention the next time you watch a romance film, and you’ll see this formula at work.

Astrology is an extremely cerebral discipline. Contrary to what many people think, you have to be very bright to understand all the math involved, to grasp the nature of the various planetary energies and how they interact with each other, to keep so much information in your head, and to be able to recall it on demand and see how it applies in a given chart or situation. Of course, someone thought of writing a book called Astrology for Dummies, but the fact is, there’s no such thing, because if you’re really a dummy, you won’t get it.

And, good astrologers have to be more than just smart. We also have to have excellent intuition, because astrology is both a science and an art. The best astrologers are those rare individuals whose left and right brains are in synch.

Because we are so cerebral and so immersed in our subject, we are easily trapped into using astrology as an intellectual exercise to avoid having to actually live. The special knowledge we have of how the Universe works does not make us immune to having to feel what everyone else feels. The fact is that love is extremely scary, because it’s the one thing that forces us to face up to ourselves. Could that be why we hate the common question so much?

When a client asks me about love, my response is, “Let’s have a look at your chart.” Inside, I’m smiling, because I know that she doesn’t have a clue what she’s really asking, especially if she’s very young. But of course I don’t tell her that. She’ll figure out soon enough that anyone who is seeking true love has to go through a complete metamorphosis. Fortunately, there’s no better tool for helping the process along than astrology. The tests and trials that come in a romantic relationship ultimately have to do with the self, and astrology is incredibly efficient in this regard, because it allows the client to step outside herself and get some distance. Once her perceptions are validated, she can get out of the pit of guilt, shame, and blame that keep her stuck.

So that’s my devious plan: help people on their quest for love, and the world ultimately will be a better place.

What I really want to know, though, is when will I find true love?