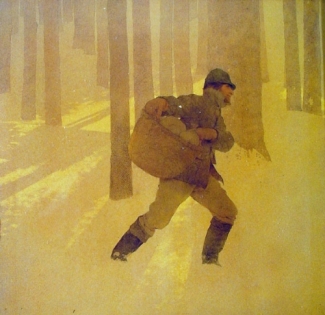 Here in the frozen North — and I do mean frozen — the longest night of the year is upon us. From now on, the days will begin to lengthen, and we know that the warmth and light of the sun will return, dark and dismal as it is now. It is no accident that the fathers of the Christian church made this ancient pagan holiday the birthday of Jesus, whom they called the Light of the World. Jesus more likely was born in the spring, not on Christmas, but no matter.

Where I live, the winters typically are pretty mild. If we get snow at all, it melts within a day or two. But we’re under a foot of snow, and everything is at a standstill — appropriate for the Solstice, which means sun at a standstill. I walked home from work last night, trudging up the unplowed hill with my bag over my shoulder, much like the hunter in this Maxfield Parrish painting trudging through the snowy woods.

Saturn-ruled Capricorn trudges on, doing what must be done. We’ll experience a lot of this theme over the next few years with Pluto in Capricorn, especially the year after next, when he’ll be squared by Saturn and Uranus. At that point, we will have to switch our focus from amassing wealth to meeting basic needs. Already, the economic downturn is causing many people to stop and think about what they really need and what they can do without. The answer to that question is, “a lot.”

Speaking from experience, I can assure you that we don’t realize how wasteful we’ve been until we begin living more frugally, and while that’s a scary prospect for many in privileged Western societies, I can also tell you that it’s exactly what many people need to wake up spiritually, to be enlightened or “come into the light.” Let me add, for those who haven’t heard me say it before, that “spiritual” is not a moral position to aspire to, but a way of seeing the invisible energies that flow through the Universe. They exist, they are real, and they impact our lives. There is nothing with wrong with wanting stuff, but too much emphasis on the material limits the vision.

With that long introduction, let’s talk about this week.

Although the Sun conjoins Pluto on Monday, most of the activity doesn’t happen until Friday and Saturday, with the entry of Mars in Capricorn and the New Moon at 6 degrees Cap, not far from Mars and Pluto, which conjoin on Sunday. Mercury and Jupiter also are in Capricorn, although in later degrees. Still, this is a lot of Capricorn, so we are going to get a full frontal view of what this sign is all about. Government, business, military, and authority in general all fall under the auspices of the Sea Goat.

In our personal lives, authority usually is represented by parents and employers. Saturn will be stationed about to go retrograde at the New Moon, so I expect that we will spend the next several months revisiting these issues. Neith will have more on the New Moon on Tuesday, so be sure to check back.

The ongoing Saturn-Uranus opposition will be active this week on many levels. Watch for developments on Wednesday, when Mercury forms a favorable sextile to Uranus, and on Friday, when Mercury trines Saturn. If you don’t know yet how this major aspect is impacting your life, you’ll get clues this week.

While all of this high-powered business is going on, Venus quietly conjoins Chiron on Tuesday and Neptune on Saturday. Although most people need a crisis or a series of crises to awaken, that a-ha moment tends not to come when we’re under the gun, but when we’re in a relaxed “in-between” space.

We can wish for world peace all we want, but it won’t happen until the prerequisite is met, and that is the awakening of the collective mind. That is my deepest hope and wish for this holiday season.

Holiday love and blessings to all…