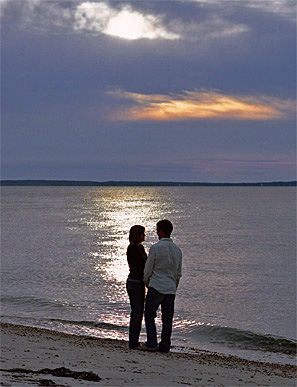 On Monday, Venus conjoins Mars, symbolic marriage of the divine feminine and masculine. True love is returning to the world, but we’ve still got some work cut out for us.

I’ve written a lot in these pages about the split between men and women, which goes back thousands of years. I see this split as our deepest wound, and the resulting imbalance between masculine and feminine energies on the planet as the underlying source of the cruelty and violence that humans perpetrate on each other, the animal kingdom, and the Earth herself.

And yet, I see signs everywhere that the balance is being restored. The world is changing as the collective and each of us as individuals heal our core wounds. Our healing process intensified under the recent conjunction of Chiron and Neptune, which is separating but active for another year or so. For many of us, healing has required reopening or at least revisiting deep wounds, many of which we carried with us into this lifetime. It has been an exhausting and painful (obviously) process that appears to be nearing completion.

For true love to stand a chance, both partners need to come into a relationship in wholeness. If you’re looking to fill in a missing piece of yourself, you’ll eventually run into serious problems when the other person fails to deliver. No one but you can find those lost pieces and bring them home.

It is possible to work on this within a relationship, and if your partner is on a similar track (it does happen), then you can grow together, and love grows, too. Indeed, being in a relationship can speed up your personal and spiritual growth considerably, because your “stuff” is usually right in your face. The irony is that resolving personal issues can be fatal to the relationship. That’s no doubt why so many couples have an unspoken pact that they will play their self-assigned roles and not rock the boat by growing and changing.

Monday’s Venus-Mars conjunction occurs in a favorable trine to Pluto and a jarring inconjunct (quincunx) to Saturn. This tells me a few things.

First, Pluto has been at the apex of a cardinal T-square with Saturn and Uranus since last year. This puts the planet of death, rebirth and transformation in the hot seat. Translated, that means we’ve been under tremendous pressure to change.

Trines provide an easy path for energy to flow, and so, this week, transformation comes via a romantic relationship (regardless of your sexual orientation). If you’ve recently extricated yourself from a difficult union, you may realize that, rather than feeling like you left a piece of yourself behind, you feel more whole and stronger than ever. You are now equipped to find a healthier and more fulfilling partnership.

That’s the good news. The not-so-good news is that Venus and Mars form a very close inconjunct with Saturn, which happens to be retrograde in Libra, the sign of relationships. Now, this is interesting, because Venus rules both Taurus and Libra. I read this as a sign that feminine energy, long suppressed and overpowered by the masculine, is making its weight felt. Mars is in his detriment in Taurus, and naturally, a lot of men aren’t happy that they’re losing the upper hand. I hope they will come to understand why balance makes them stronger, not weaker.

Anyway, the discordant angle to retrograde Saturn is a reminder that there is still a lot of work to do, and transforming may require that you grit your teeth and try to move through the obstacles to love. And for all that, you may find yourself in a “damned if you do, damned if you don’t” situation. Pluto says we must transform, but choosing that path may lead to a breakup. It’s a tough choice, but most people I know who chose to detach from a lopsided relationship have had few regrets.

Mars and Venus are conjunct on Monday, with Venus inconjunct Saturn on Tuesday and Mars inconjunct on Wednesday. The Mars aspect is even more complicated in that Mars and the Moon in Pisces will create a Yod, with Saturn at the apex. Often it’s not what’s said that sabotages a relationship, but what isn’t said. It takes a lot of trust and courage to be completely honest with your partner about how you feel.

On a completely different note, the Sun in Gemini sextiles Uranus on Wednesday. Watch the news headlines for surprising developments, probably of a positive nature. Now that would be news!

The following day, the Sun squares Chiron and then on Saturday forms an inconjunct with Pluto, bringing the theme of the week full circle. As hard as we try to serve the cause of True Love, as willing as we are to confront our own demons, we are fighting stubborn, deeply ingrained patterns that have existed for millennia. But just remember, it’s that last grain of sand that brings the scales in balance.