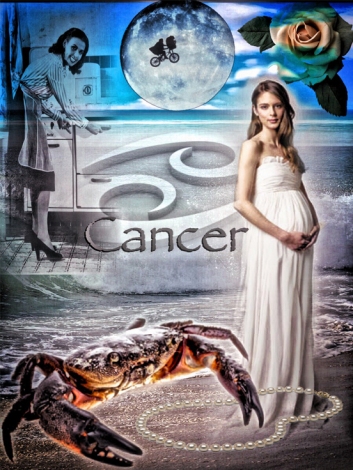 With the pain and setbacks of the past few weeks still heavy on our minds and in our hearts, we’re at last getting some encouraging news, with real signs of progress.

This week looks good for more positive change, with fortunate planets Venus and Jupiter finally reaching exact conjunction – and it’s going to be a spectacular sight. Better still, both planets are in a positive trine to Uranus the Awakener. An intense Full Moon on Wednesday shows us how far we’ve come and what we’ve had to sacrifice to get to a new place, and it hints about the fights still ahead. For now, though, we can celebrate in gratitude and heap loads of love and appreciation on our comrades in arms.

The U.S. Supreme Court’s landmark decision last week to protect gay marriage is a major win for civil rights. And while it took a shocking tragedy to jar some folks awake, a new national discussion has emerged about racial inequality, with questions about whether the Confederate flag is a loaded symbol that sends the wrong message. National Public Radio called this turn of events “a reset in the culture wars.”

“Reset” and “culture wars” are keywords for outer planetary cycles, which operate on a global, societal scale. The Uranus-Pluto square, at its peak from June 2012 to March 2015, signaled the breakdown of social structures that were created at a particular stage in human evolution but that are falling apart as human consciousness expands. I’ve written a lot on this blog about the trends that emerged at the beginning of this Uranus-Pluto cycle in the mid-sixties, a time of widespread social unrest and cultural revolution (revolution being a Uranus keyword). Among the biggest movements at that time were battles for racial and gender equality.

But it didn’t start there. The civil rights movement began a decade earlier, when Rosa Parks refused to give up her seat to a white passenger on a bus in Montgomery, Ala. A year before that, the Supreme Court ruled that segregation in schools was unconstitutional. At the time, Pluto in Leo was in a dynamic sextile with Neptune in Libra, the scales of justice. Saturn in Libra was approaching a conjunction with Neptune. Uranus in Cancer was just past a square with Saturn and approaching a square with Neptune. At the moment the decision was handed down, Pluto was on the Ascendant, closely sextile Neptune in Libra and Venus in Gemini. Five days later, Venus conjoined Jupiter. In other words, there was an overlap of several cycles, all in near-exact aspect, involving all three outer planets plus Jupiter and Saturn.

We can go back even farther to the Civil War, which occurred between the beginning of a new Uranus and Pluto cycle in 1850 (late Aries, with Saturn in the mix) and the first square in 1876. In 1868, three years after the war ended, the Fourteenth Amendment was added to the U.S. Constitution, forbidding states to deny anyone in its jurisdiction “equal protection of the laws. Not surprisingly, it was heavily contested when it was proposed. To this day, there are a lot of crazy wingnuts who insist that it wasn’t legally ratified. There also is a conservative contingent in the South still bitter that the Confederacy was defeated and that they were forced to desegregate. That’s more or less the message of the Confederate flag (actually a variation on the original), whatever the “official” explanation may be about history and heritage. But South Carolina has been the only state to openly fly the flag at its Capitol.

As you’ve probably read, the Fourteenth Amendment was the basis for the Supreme Court’s decision last week on same-sex marriage. Here’s the most-quoted paragraph of the court’s opinion, written by Justice Anthony Kennedy:

No union is more profound than marriage, for it embodies the highest ideals of love, fidelity, devotion, sacrifice, and family. In forming a marital union, two people become something greater than once they were. As some of the petitioners in these cases demonstrate, marriage embodies a love that may endure even past death. It would misunderstand these men and women to say they disrespect the idea of marriage. Their plea is that they do respect it, respect it so deeply that they seek to find its fulfillment for themselves. Their hope is not to be condemned to live in loneliness, excluded from one of civilization’s oldest institutions. They ask for equal dignity in the eyes of the law. The Constitution grants them that right.

The truth and beauty of that passage is so powerful that I had to re-read it a few times. Only after that did the word “union” catch my eye. Isn’t that what the Civil War was all about? To preserve a union? And neither type of union is truly healed. The dispute over the Confederate flag and tragedy that reignited it is a sign of a festering wound in the national psyche. It’s easy for the winning side to “move on,” free of guilt, because, after all, we had the moral high ground. But we’re not whole. We’re divided from the “other,” and successful legislation not only can’t eradicate bigotry, but makes the bigots more defiant. And on top of that, we pile hate.

Somehow, we have to find a way to hate bigotry without hating the bigots. Bigotry is a belief system. It can be changed. Not easily, but it can be changed, and the bigots transformed. The Aquarian idealist in me sees few truly evil people in the world. There are just people stuck in patterns that they learned from someone else, who learned it from someone else before them, however many generations ago. Passing a law is just a start, a means of limiting the damage they can do while we work on deeper healing. And we are going to have to work at it. Just as racism is still rampant (and not just in the South), it could be another generation or two before a same-sex couple can walk down the street holding hands anywhere in the country without being harassed.

Just for the heck of it, I cast charts for Friday’s Supreme Court decision and for the ratification of the Fourteenth Amendment (right and below). The thing that leaped out at me in Friday’s chart was Juno on the Ascendant. Juno is one of the “goddess” asteroids, named for the wife of Jupiter in Roman mythology. Astrologers naturally were of the opinion that she had something to do with marriage in a chart. Although that’s an overly simplistic interpretation, I have used her as an indication of marriage. Here’s a good bit of evidence that we’re on the right track. Also, there’s a sextile by exact degree to Juno from the Moon in Libra, sign of relationships and of social justice (no aspect line), and a positive trine from the Moon to the Sun and Mars. And then, of course, there’s the trine from Jupiter and Venus in Leo to Uranus. Leo rules the heart. Jupiter is expansive and generous. Venus is the goddess of love.

In the chart for the Fourteenth Amendment, Uranus is at the exact degree of the Sun in the U.S. chart (Sibly, chart not shown), four days after the U.S. solar return. Venus, meanwhile, is in a grand trine with Chiron, the healer, and Saturn. And look where Saturn is! I did a double take and thought I must have accidentally cast the chart for 2015. I’ll have to think about what this means, but if anyone has any ideas, please leave a comment! I’ve created a third chart that combines the two, so you can see all the critical points.

OK, I’d better get on to the week ahead. As I wrote above, it should be a positive and productive week, with Venus and Jupiter working more magic as they move closer to conjunction on Wednesday. NASA says it will be like a bright double star – which, by the way, is one of the theories about the Star of Bethlehem. Venus and Jupiter are going to stay relatively close to one another for the next four months and will make two more conjunctions, due to her retrograde from July 25 to September 6. I’ll have more on that in a future column. In the meantime, astrologer Austin Coppock has an interesting interpretation.

On Monday, it’s Venus’s turn to trine Uranus. Jupiter had his last Monday. Uranus can be a mischief-maker, and not all surprises are happy ones. But I think most of the unexpected events this week will be pleasant surprises, with more opportunities, whether new or as a result of a door that opened last week.

On Tuesday evening and Wednesday morning, Jupiter and Venus form a disturbing inconjunct with Chiron. I’m not too worried about this one, because there’s a positive “outlet” for the tension via Uranus. It could even mean that a healing event will take place, although not without some pain. Strong weather events are a possibility, too, with air and fire being prominent. Actually, that sounds more like wild fires or more excessive heat and drought. A second outlet goes to Mercury in Gemini, representing information, knowledge, communications, and the news media. The latter are getting a real run for their money as people get more of their news from the social media, where individuals upload their own records of events – so-called “citizen journalism.” We do need to keep our critical thinking caps on, because there’s a lot of BS on the Internet, some of it intentional, some of it by folks without professional standards or ethics – the ones that used to be the hallmark of good reporting. It’s all just a big grab bag right now, so caveat lector.

Wednesday is the Full Moon in Capricorn (chart to the left), with the Moon conjunct Pluto opposite the Sun conjunct Mars. This is the potential “hot spot” of the week. There’s always a war somewhere in the world, but this looks like a major outbreak. Protests and demonstrations could be more animated, too, with the all-too-familiar overreaction by militarized police forces. That said, there also is a positive outlet here in the form of Neptune, who is sitting at 9 degrees Pisces after turning retrograde on June 12. Looking back at our collective history can be healing, and in fact, we’re seeing this already; for example, in the debate over the Confederate flag. Whatever transpires around this Full Moon (plus or minus three days), it will fuel the shift that has been activated by the Uranus-Pluto square.

The square from Mercury to Chiron in the Full-Moon chart reflects the painful nature of these conversations. Not only are we dragging up traumatic memories, but we are forced to look deeply into our own hearts and souls to understand how we have participated in divisiveness. It’s not easy to shift into unity consciousness, but every small step in that direction builds the momentum. As more and more of us head in that direction, we create a current that makes it easier for everyone to keep moving. July 4 is Independence Day in the United States, making all of these conversations that much more meaningful in this country.

That’s it for this week.

Love and courage have won the day; don’t stop now!